Skip to main content and our Accessibility Statement may be found in the footer of our website.
Back To Obstetrics Stories

Jake Eichler was born in the Neonatal Intensive Care unit 13 years ago. Today, Jake will be raising funds for a project or organization dedicated to helping fellow preemies and their families. 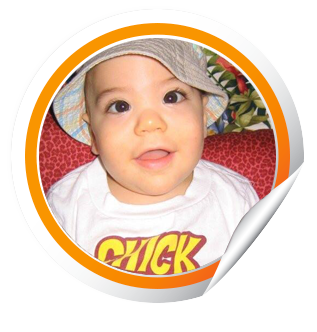 Nearly 20 years ago, Allison Eichler learned she was pregnant for the first time. However, after 21 weeks doctors shared with Allison devastating news; because of a condition called placenta previa, which had caused all of the amniotic fluid to leak, a late termination was necessary.

“Afterwards the doctors couldn’t figure out, other than placenta previa, why I couldn’t heal. I was told, however, if I wanted to have another pregnancy I would be high-risk.”

Five years later, Allison and her husband Luke decided to try again, to everyone’s delight and surprise she became pregnant within just one month. Allison experienced the same severe morning sickness that she experienced during her first pregnancy. After 14 weeks into the pregnancy, Allison began to faint, sometimes up to five times a day. Despite these extreme symptoms, her blood work and test results were showing that everything was normal.

Allison expected to go into labor on March 12th but on December 2nd she was rushed to West Boca Medical Center after her water broke while she and Luke had been out to dinner.

Upon arrival, Allison had a team of doctors and nurses providing around the clock care. Dr. Jane Rudolph and Dr. Stewart Newman were the Obstetrician-Gynecologists on call; Dr. Stewart Newman having slept in the room adjacent, was made available at a moment’s notice. The Neonatologist, Dr. Feyisola Awonusonu, reassured Allison that the Neonatal Intensive Care (NICU) team would do everything medically possible to ensure a safe delivery and healthy baby. Soon after arrival, the doctors determined it was time to deliver the baby, despite being nearly three-and-a-half months early.

Allison feared for her child, “I already lost one, I couldn’t help but think, what could happen.”

Jake was born on December third after only twenty-five weeks in his mother’s womb, weighing two pounds, two ounces and measuring slightly less than 14 inches. Infants who weigh less than two pounds and two ounces are categorized as an extremely low birth weight infant (ELBW). They are the youngest of premature newborns; usually born at 27 weeks' gestational age or younger and have an increased risk of complications.

While Allison was in recovery, Jake was taken to the Neonatal Intensive Care Unit (NICU) to be closely monitored. It was an emotional experience when she first saw her son. A baby cuff dangled on his ankles and he wore tiny clothes designed specially for premature infants. Jake had an intravenous lines (IV) in his central vein to give him antibiotics and an IV to provide nutrition as he was unable to eat. He also had a breathing tube and a stomach suctioning tube.

“It was a huge roller coaster because it’s your child and all you want to do is hold him, you want to make him feel safe.” 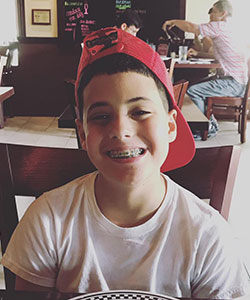 He endured countless complications in his first fragile days, however doctors worked quickly to optimize every possible outcome for the baby. Due to a perforation in his intestine, Dr. Melvyn Karp, Pediatric Surgeon, performed two emergency surgeries. The first was exploratory surgery and removal of the intestinal perforation. Two months later he had another surgery where Dr. Karp essentially put his intestines back together. He also had retinopathy of prematurity (ROP), an eye disease that causes abnormal blood vessels to grow in the retina. Dr. Lee Friedman, Pediatric Ophthalmologist, monitored Jake’s eye closely as his retina could detach, leading to blindness.

Allison negotiated with God, “If he doesn’t make it, take me too.”

After 79 days in the NICU, Jake was released on February 29th. For his first few nights at home, Jake wouldn’t stop crying. Allison soon realized he had become accustomed to the lights and noises common in the NICU unit, so she turned on the television and lights and Jake finally drifted to sleep.

“He is not fazed by beeping sounds in doctor’s offices, and will look directly at the needles when getting shots. He never really cried about that stuff, it is part of who he is.”

There were still a number of procedures Jake would have to face, however he took them with great strides.

“He has been through a lot, he is our fighter.”

Today, Jake is 13 years old and very special to his parents. “He is a very social, loving, sweet kid who tells us ‘I love you.’ He is headstrong, determined, compassionate, and artistic. He is a teenager in middle school trying to find his way.”

Although Jake doesn’t remember his experience at West Boca Medical Center, every so often, his parents would take him back to the NICU to help him understand his early life and to foster compassion for those in a similar situation.

“The NICU was our home. We all became very close there. It was like a family.”

In November, Jake will be receiving his Bar Mitzvah. As one of his first actions as an adult, he hopes to give back to the hospital that saved his life, West Boca Medical Center, by raising funds for a project or organization dedicated to helping fellow preemies and their families.

Jake’s parents are so proud of him and who he has become. “He is a miracle. They told us he is miracle years ago because he went through so much. Any baby born early is a miracle.”