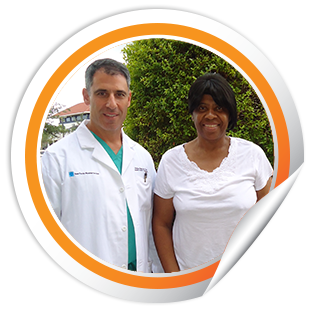 Grand Cayman Island fourth-grade teacher Winsome Parker is a big believer in hands-on learning, so she's constantly on the move, interacting with her students. But an unforeseen trip — over a parking curb — took her out of action, with a twisted ankle and torn ligaments and tendons in her knee that put her in a cast. She was treated at first at a facility in the Cayman Islands, but when her son, who works at the hospital, saw her knee wasn't improving, he insisted on more tests.

An MRI revealed the injury was more serious than they'd thought.

"The next thing I knew I was on a plane to South Florida, where my aunt and nephew live," Winsome says. "When I arrived, I found out the hospital I planned on going to wouldn't accept my insurance. Panic began to set in. What would I do now?"

It didn't take long before she received a call that changed everything.

"An international concierge coordinator from West Boca Medical Center reached out and told me about an amazing orthopedic surgeon who could fix my knee," Winsome recalls. "I was hesitant at first after what happened with the other hospital. I wasn't sure who I could trust. The international concierge coordinator emailed me some more information and assured me I'd be in great hands. It was from that point on that I believe my healing process officially began."

Two months had passed since her injury and she was only getting worse. It was a leap of faith for her to make an appointment with Dr. Jonathan Hersch, but the leap landed her right where she needed to be.

"The first thing he did was operate on my knee to remove scar tissue that had built up over time," Winsome says. "Three days later, I was able to bend my knee up to 90 degrees! Dr. Hersch made sure I stayed mobile and that I stayed strong, not only physically, but mentally. I had so much confidence in him when he went in again to reconstruct my Anterior Cruciate Ligament (ACL) and Posterior Cruciate Ligament (PCL)."

Dr. Hersch and his team went out of their way to make sure Winsome wouldn't have to worry about anything during her recovery. He set up surgeries around her schedule so her son could be with her. Dr. Hersch even wrote a letter to her school to help secure a salary continuation plan, explaining the limitations she would face once she returned to her job.

"Dr. Hersch’s team did everything possible to make my life easier, and I am forever grateful to them," Winsome says.

After completing physical therapy, she continues to see improvement every day.

"Because of the orthopedics team at West Boca Medical Center, I know a full recovery is in my near future," she says. "In the meantime, I'm not letting my limited mobility keep me from doing what I love most — molding the minds of young students."