Jun 6, 2019
Rehab team helps stroke patient get back to helping others 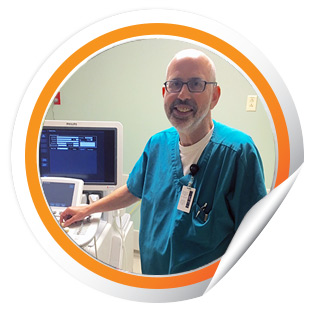 For 29 years, Martin Flapan has been helping people as an ultrasonographer at Delray Medical Center.  His job entails taking ultrasounds of patients to diagnose different types of medical conditions. However, about two years ago, Martin’s life did a complete 180 when he was the one relying on others for help.

The first sign of a problem came when he began experiencing pain in his right leg after moving furniture in his house. He had been making accommodations for his mother-in-law to move in with him and his family.

“I thought I had just strained it from moving the furniture and didn’t think much of it,” he recalls. “I ended up going to work the next day.”

However, throughout the workday, Martin found his arm getting weaker and recognized he wasn’t able to do things that were typically routine. Still, he didn’t think it was anything more than just strained muscles from the day prior. It wasn’t until early the next morning when Martin got up to use the bathroom that he collapsed on the floor.  His wife immediately called 911.

“I couldn’t figure out what was happening to me,” he says. “It was all so surreal.”

He was rushed to West Boca Medical Center where the medical staff took his blood pressure. The top number is considered high if it’s above 130, and Martin’s was over 240!

“It took three different nurses taking my blood pressure to make sure it wasn’t a mistake,” he remembers.

Due to his symptoms, it was clear Martin was suffering a stroke. Although his speech wasn’t affected, his right hand was clenched shut and he couldn’t move the right side of his body. Unfortunately, since his symptoms started two days prior, too much time had passed to administer the clot-busting drug, tissue plasminogen activator (tPA). Therefore, Martin stayed in the Intensive Care Unit for several weeks, followed by inpatient rehabilitation. He made remarkable progress, and once he was well enough to go home, he returned to West Boca Medical Center for outpatient rehab twice a week.

Thanks to the guidance and support of Martin’s rehab specialist, Robin, he felt motivated to push himself as much as possible.

“Without the help of Robin I wouldn’t be where I am today,” he shares. “She was thoughtful, compassionate and believed in me when I didn’t believe in myself.”

Martin completed two months of rehab, and during that time, his clenched hand opened up, and he now has full use of his hand and fingers. After nearly a year away from his job as an ultrasonographer, he is back at work and feels grateful to be doing what he loves.

“For all the help I was given during this difficult time in my life, I am glad that I am back to helping those who need it too.”