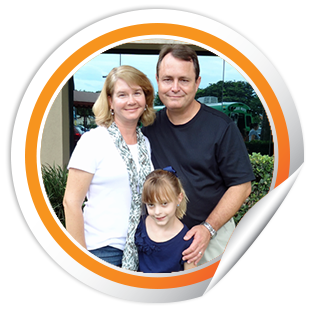 As a young girl, Joleen Padgett always imagined falling in love with the man of her dreams and becoming a mother.

It looked like all that was falling into place when Padgett was 36, and she and her husband, John, learned of her pregnancy.

Everything was going smoothly until, at six months pregnant, Joleen went to see her obstetrician, Dr. Laura Greenbaum, for what she thought was a routine appointment. However, she found out that her blood pressure was sky-high, and when it didn't improve, Dr. Greenbaum admitted her to West Boca Medical Center.

"My blood pressure continued to go up, and it was starting to slow down the baby's heart rate," she says. "It was a very dangerous situation for both of us."

A frightened Joleen learned the next morning that she would have to deliver her baby girl right away.

"My husband and I were shocked that it was even possible for our daughter to be born that early," she says. "We didn't know anything about Neonatal Intensive Care Units (NICUs), and we had no idea what would happen after she was born."

Joleen and her husband were very fortunate to be at West Boca Medical Center, which has the only Level III NICU from Boca Raton to Northwest Broward County. The designation means that the hospital can provide the most extensive services for premature and at-risk babies.

"We unknowingly chose to give birth at a hospital with some of the most extensive and high level of services available for premature babies," she says. "When we found this out, we felt our baby had the best chance possible."

Their daughter, Laken, was born at only one pound, three ounces via an emergency cesarean.

"She came out wiggling around, crying like a little kitten — it was clear she would be a fighter," her mother says.

Laken was intubated and taken straight to the Level III NICU under the care of Dr. Awonusoma Feyisola and Dr. Penna Reddy. By the next morning, the tiny fighter was off the respirator and breathing on her own. It would be another day before Joleen could see her, and a full week before she would be able to hold her, but she notes that "the doctors and nurses were wonderful at keeping us informed and answering any questions we had."

Laken spent 98 days in the NICU.

"A week before her actual due date, we finally took our baby girl home," Joleen says. "Due to the support of the NICU staff at West Boca Medical Center, our journey turned out to be such a positive experience, and I felt compelled to share my story. Each nurse who cared for Laken contributed something unique that benefitted her in some way. We believe the small things the staff did, such as massaging her and playing music, truly made all the difference."

Laken is now a healthy, happy little girl enjoying elementary school. Who could ask for anything more?