How we brought the smile back to her baby's face 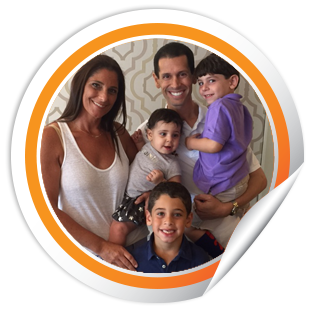 It was just like any other Sunday at the Vogel house. Jay and Jen Vogel’s two boys were outside swimming in the pool, while Jen was inside with their 10-month old daughter, Charli. “She was happy and playing around in her Pack ‘n Play,” Jen recalls.

Jen walked into the kitchen to get something, and when she turned around just seconds later, Charli’s little body was sunken down and her face was pressed against the netting. Jen rushed over and found her non-responsive. She immediately called 911.

“It’s a scary and helpless feeling as a parent when you feel like you can’t help your child,” she says. “You don’t want your mind to drift there but of course you think about the worst case scenario.”

Within minutes, EMS arrived and discovered that Charli’s temperature was 103 degrees. They told Jen they believed she was having a febrile seizure that was triggered by the fever. The condition is rare, only occurring in 2 to 5 percent of American children before age 5.

Charli was taken to West Boca Medical Center, where the medical staff performed a battery of tests, including a CT scan, ultrasound, spinal tap and X-rays, to ensure she didn’t have an underlying or more serious condition causing the seizures. Luckily, everything came back negative, so it was just a matter of stabilizing Charli and getting her fever to break.

Until then, she would need to stay in the Pediatric Intensive Care Unit (PICU).

Dr. Anwar Vardag, medical director of the PICU, treated Charli with a steady dose of Tylenol and Motrin in an effort to keep her fever down. Anytime her heart rate elevated, it was a sign that her temperature was starting to rise again.

“Dr. Vardag was amazing,” says Jay. “He was incredibly gentle and informative about Charli’s prognosis and took great lengths to take care of her.”

Jay and Jen’s baby girl spent the next few days in the hospital fighting off a fever that seemingly refused to break.

“It wasn’t until Tuesday that Charli started acting like herself again,” says Jen.  “We were so relieved to see that after day three her vitals were back to a normal temperature.”

By Wednesday afternoon, Charli was released and able to go home with her family.

As for her parents, they are thankful they came to West Boca Medical Center for their daughter’s care. “I’ve had two of my children at West Boca and always felt a connection to this hospital. I wouldn’t think of going anywhere else.”

Now, Charli is back to being a bubbly, loveable little girl who enjoys being with her family and spending time in her Pack ‘n Play.

“The level of care Charli received in the PICU was more than what we could have hoped for,” Jen shares. “It gave us comfort to know she was in such good hands.”