A Different Kind of Service 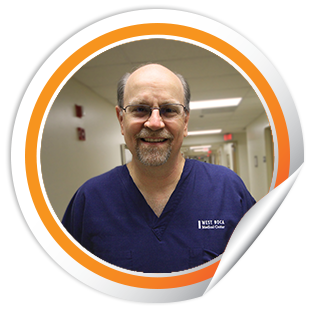 You could call Hal Oster a long-time West Boca Medical Center employee – perhaps one of the longest since he technically started a few weeks before it opened in 1986.

Hal, a Long Island, N.Y. native, had been interested in nursing since volunteering for the Red Cross in his area.

"Back then, it was an RN who ran the program,” he says. “She liked the way I interacted with people. I told her I didn't know what I wanted to do, so she kind of put it in my head about being a nurse."

Hal got accepted to nursing school and has devoted his life to serving others ever since. He and his wife are both nurses at West Boca, after spending a few years at healthcare facilities in Long Island. They moved to Florida in 1983 and joined the West Boca staff in '86.

"I've always had a good experience here," he says. "The management teams have always been very solid and the people are great to work with. The patients are a nice mix of people. In the ambulatory care unit, I see babies a week or two old coming in for surgery all the way up to people in their 90s or early 100s."

Hal has moved around a bit during his time here. He worked in the ER, spent some time as a charge nurse in the ICU, and also did some relief nursing supervision before ending up in his current position in ambulatory care.

West Boca, he says, is like home to him.

"I moved into my house in 1987, so I've been coming here longer than I’ve lived in my house," he says. "The beauty of my job is I get to be everywhere and everybody knows me. It's a win-win situation. I get positive feedback from the staff and from the patients."