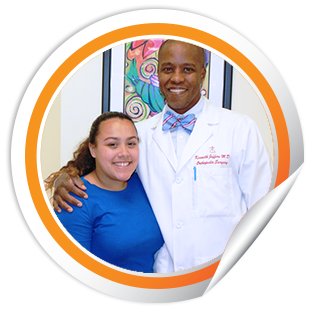 Back pain is not altogether unexpected when you reach a certain age. But in middle school?

Yes, that's what avid soccer player, Estrella Santiago, was facing at only 13 years old. She tried to hide the pain, fearing she'd be prevented from playing her favorite sport. Eventually, however, the pain became so intense she could no longer run down the field straight. A screening in her seventh-grade gym class forced her to face the reality that she might have scoliosis.

When her pediatrician suggested she see a specialist, Estrella's father immediately began researching pediatric orthopedic surgeons and made an appointment for her to see Dr. Kenneth Jeffers.

Dr. Jeffers, who is on the medical staff at West Boca Medical Center, noticed the severe curvature of her spine and determined after X-rays and mobility tests that the condition was likely to worsen.

"He said the best option was to surgically fix the problem," says Estrella. "In the short amount of time from when I first met with Dr. Jeffers until my last appointment before the surgery, the curve in my spine increased from 44 to 54 degrees!"

She stayed at West Boca Medical Center for four days and worked with a physical therapist every day.

"I had nothing but positive experiences," she says. "The staff was unbelievable, especially while I was in the pediatric ICU. They were very caring and knew just what to do to cheer me up when I was down."

Just two months after the surgery, Estrella tried out for the Deerfield Beach Middle School Junior Bucks Girls Soccer Team — and made it. The sweeper and fullback says now that her scoliosis is gone. She feels "amazing" and is ready to focus on her dreams of becoming a professional soccer player and a veterinarian.

"I am extremely happy and grateful that my scoliosis and back pain are behind me for good," Estrella says. "Thanks to Dr. Jeffers and the West Boca Medical Center team, I am able to shoot for my goals!"