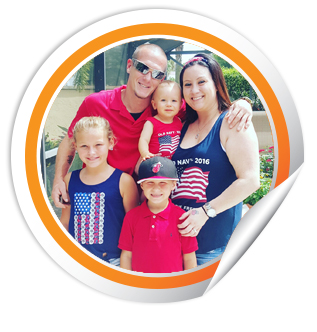 With only one month to go, Brittany Szoke and her husband couldn’t wait for the arrival of their first child, a baby boy. She felt lucky because even though her pregnancy was considered high risk due to being diabetic, she hadn’t experienced any issues thus far.

However, everything changed when, at about 8 months pregnant, Brittany started suffering from severe abdominal pain and came to West Boca Medical Center. After being admitted, the staff monitored her closely to figure out if she was experiencing normal labor pains, or if there was something more serious going on with the baby. It was Brittany’s nurse, Barb, who suddenly made the call that her son needed to be delivered immediately.

“I didn’t really know what was happening,” Brittany recalls. “There were a lot of people coming in, and Barb called the doctor and said this baby needs to come out now. At the time, I didn’t realize how serious the situation was.”

She later found out that the umbilical cord was wrapped around her baby’s neck, and time was of the essence. Within about 30 minutes, the staff at West Boca Medical Center broke her water and delivered the baby.

“If my parents weren’t there to support me, along with my husband, I don’t think I would have been able to keep it together,” Brittany shares.

When her son, Dylan, was born, he suffered two seizures and was sent straight to the hospital’s Level III Neonatal Intensive Care Unit (NICU).

For the next month, Brittany and her family would make the NICU their second home. “The staff was beyond amazing,” she says. “Anytime I wanted to come visit and be with Dylan, they would allow me to just sit with him – it was wonderful.”

Despite all of the complications surrounding Dylan’s birth, he was eventually strong enough to go home and is now living a normal life. In fact, he is about to celebrate his 1st birthday.

“If my son needs medical care in the future, I won’t go anywhere other than West Boca Medical Center,” Brittany says.  “They are the reason he is here today, and I will never forget that.”